Bill Cameron and Dick Edwards in the Atlantic

not the best picture in the world as the newspaper it came from has been crumpled up for about 60 years. 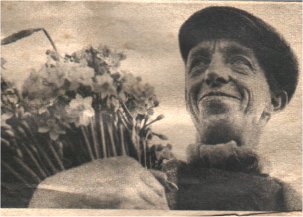 As far as I know, Dick was born and lived all his life in the house next to the Church, where I now live. When Dick died, 'Nurse Isherwood' moved in and she lived here for several years. 'Nurse Isherwood' and 'Connie Groves', ('Mark Grove's' Mother), were the two midwives who brought me into the World. (I was a breeched birth and it took two of them several hours to accomplish the task). Ask my Mum if it was worth it!