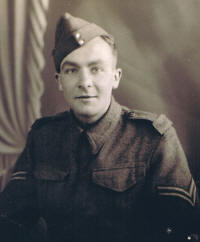 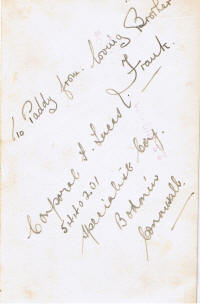 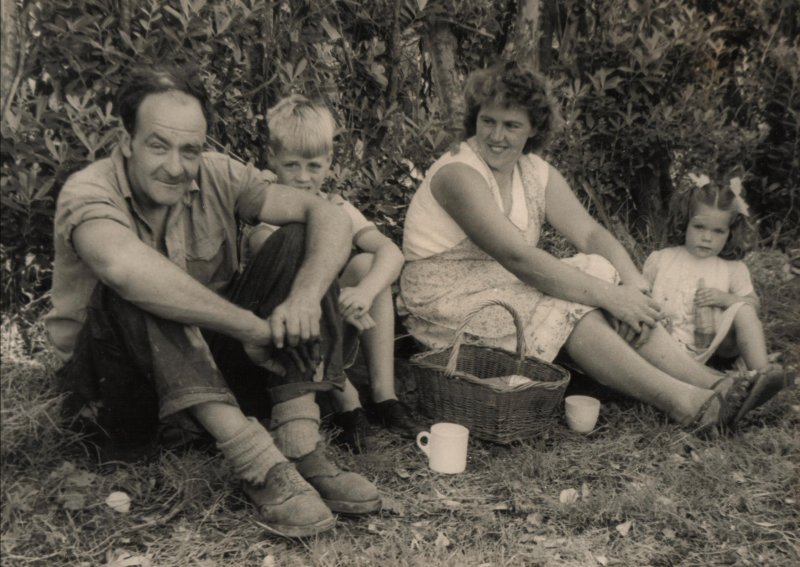 Born on 21st November, 1917 in ‘Canning Town’, London. A true East-ender and a genuine ‘cockney’ He was the son of a shoemaker and learned the trade as such. One of 8 brothers & sisters and although throughout his life in Scilly, everyone knew him as Tony, he was actually christened ‘Frank’. Only one brother, Harold remains still alive.

He joined the Territorial Army in 1939 and was called up to serve in the ‘Royal Army Ordinance Corps’ in 1940 aged 23 yrs. He travelled down to Bodmin in Cornwall to join the Regiment where he trained as a mechanic. He served in the deserts of Palestine and received a ‘commendation of Service’ from the ‘C in C’ Desert Forces’, General Paget.

In 1947 aged 29 he came to Scilly and in early 1948, some 6 months after I was born,  met my mother Melba. He worked on the Quay as a lorry driver for Harold Solomon, delivering coal. I remember him coming home at the end of the day black from head to foot. He also drove one of the quarry lorries for a time. In 1951 the three of us moved to London so that Dad could get better employment. We ended up living in a flat just down the road from Dad’s brother, Vic. London was still being rebuilt after the war and he soon got work, firstly driving refuse from the Tate & Lyle factory to the local dump, then as a Ready Mixed Concrete driver. In fact it’s a pretty safe bet that any large building that went up within a 10 mile radius of Canning Town between 1952 and 1956, Dad would have delivered concrete to it. I spent many hours driving around London with him and I'm sure it was that which nurtured my own driving career. For various reasons in 1957 he brought us back to Scilly and got a job as a labourer on Mawer’s Farm which included a ‘tied cottage’ at Trewince.. Most of the time we were all happy in our little cottage, on a Friday evening Dad and I used to run most of the way to Town to go to Pictures. He was still very fit at 40. Unfortunately, it was about to change because around 1961 he had an accident at work and damaged his hip. This led to physical complications and because he couldn’t work on the farm, we had to move out of our house. Over the next few years life became very difficult for him as other illnesses started to creep up on him. From the age of 43 he suffered great physical pain and incapacitation. Even so, he didn’t give up and managed to get a job on the Council Direct Labour force as a Painter & Decorator. He seemed to be happy doing that but by 1980 had to give that up too. From 1961 he endured several operations for various problems including 2 major hip replacements.

He was a great organiser and this showed in the meticulous way he kept his records, even at the age of 90 his paperwork was painstakingly itemised. He was a great ‘fixer’ and could turn his hand to mending anything from a pocket watch to a lorry. He made my sister Bonnie a ‘crib’ when she was born and I’ve never seen a better one in my life. It rocked from side to side when pushed and was adorned with white satin. It’s a pity there was no such thing as colour photography in those days. He made my ‘trolley’ for me and mended my bike whenever it needed fixing, even though he had spent 8/9 hours on the farm during the day. He used to wear a leather flying jacket which he salvaged from his time in the army. On Guy Fawkes night when I was a toddler, he would take Mum & me down to Town beach to watch the fireworks. When I got cold, he would wrap me in it. All through my childhood I worshipped that jacket and spent hours curled up on it in front of the fire. One day asked him if I could have it. He told me, “When you’re big enough to fit it, you can have it!” So every birthday I would go through the ritual of ‘officially’ trying it on, until one day when I came home from the Navy he handed it to me and said, “I reckon you’re big enough now!”

To sum up his life I would have to say that he gave a lot of his time helping others and was always around if you needed him. He was generous to a fault and could never say, “no” to anyone needing help. He never went into things half heartedly and put all his energy into the numerous hobbies and interests which he developed. Photography, Painting, Bird watching, stamp & coin collecting and boating. When he retired from work he bought himself a speedboat and spent many happy hours tearing around in it. Although he suffered great pain and incapacitation, he didn’t give up trying to make the best of things and grabbing as much from life as he could. He was not for ‘giving up’ and even 2 days after his 90th birthday, rejoiced in the fact that they were going to fit him up with a ‘pacemaker’.

Although he was my stepfather, he was the only father I ever knew. I am proud to call him ‘Dad’ and thankful for that twist of fate that brought him into my life. He made my life better for having been a part of it and I shall treasure my memories of him. I know I also speak for my sisters, Yvette, Bonnie and their children. 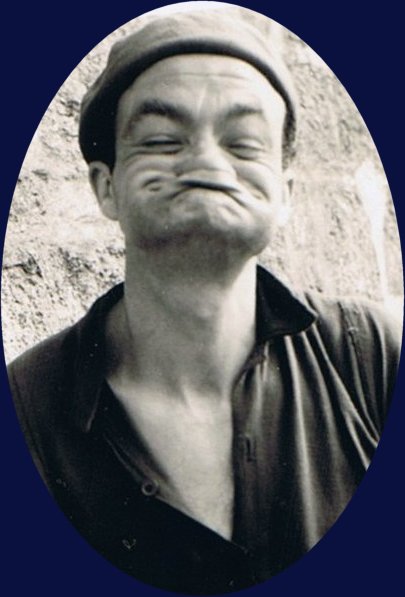 Above: Dad pulling one of his famous faces.

If there is a Heaven, he deserves a place in it.